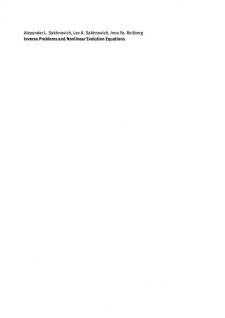 This book is based on the method of operator identities and related theory of S-nodes, both developed by Lev Sakhnovich. The notion of the transfer matrix function generated by the S-node plays an essential role.

The authors present fundamental solutions of various important systems of differential equations using the transfer matrix function, that is, either directly in the form of the transfer matrix function or via the representation in this form of the corresponding Darboux matrix, when Bäcklund–Darboux transformations and explicit solutions are considered. The transfer matrix function representation of the fundamental solution yields solution of an inverse problem, namely, the problem to recover system from its Weyl function. Weyl theories of selfadjoint and skew-selfadjoint Dirac systems, related canonical systems, discrete Dirac systems, system auxiliary to the N-wave equation and a system rationally depending on the spectral parameter are obtained in this way.

The results on direct and inverse problems are applied in turn to the study of the initial-boundary value problems for integrable (nonlinear) wave equations via inverse spectral transformation method. Evolution of the Weyl function and solution of the initial-boundary value problem in a semi-strip are derived for many important nonlinear equations. Some uniqueness and global existence results are also proved in detail using evolution formulas.

The reading of the book requires only some basic knowledge of linear algebra, calculus and operator theory from the standard university courses.