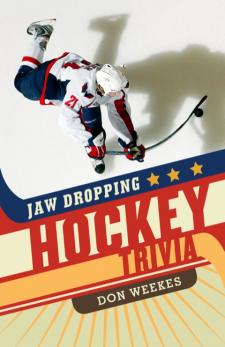 From the scoring exploits of historic greats like Gordie Howe, Dit Clapper and Joe Malone to hockey heroics ripped from yesterday's headlines—including the wild 2011 Cup final between the Boston Bruins and the Vancouver Canucks—these quizzes and games will test the knowledge and stoke the passions of hockey fans everywhere. In eight cleverly constructed theme chapters, among them a chapter on swashbuckling Stanley Cup clashes and another on the on-ice drama at the Vancouver 2010 Olympics, renowned hockey trivia master Don Weekes takes the reader on a colourful journey through hockey lore. From glorious victories to hilarious interview quotes, the greatest sport on ice is crammed, in all its zany glory, into this terrific trivia collection.