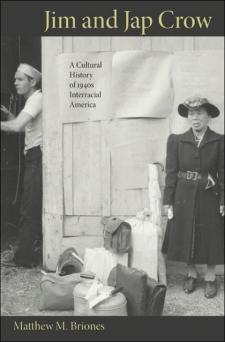 Following Japan's attack on Pearl Harbor in 1941, the U.S. government rounded up more than one hundred thousand Japanese Americans and sent them to internment camps. One of those internees was Charles Kikuchi. In thousands of diary pages, he documented his experiences in the camps, his resettlement in Chicago and drafting into the Army on the eve of Hiroshima and Nagasaki, and his postwar life as a social worker in New York City. Kikuchi's diaries bear witness to a watershed era in American race relations, and expose both the promise and the hypocrisy of American democracy. Jim and Jap Crow follows Kikuchi's personal odyssey among fellow Japanese American intellectuals, immigrant activists, Chicago School social scientists, everyday people on Chicago's South Side, and psychologically scarred veterans in the hospitals of New York. The book chronicles a remarkable moment in America's history in which interracial alliances challenged the limits of the elusive democratic ideal, and in which the nation was forced to choose between civil liberty and the fearful politics of racial hysteria. It was an era of world war and the atomic bomb, desegregation in the military but Jim and Jap Crow elsewhere in America, and a hopeful progressivism that gave way to Cold War paranoia. Jim and Jap Crow looks at Kikuchi's life and diaries as a lens through which to observe the possibilities, failures, and key conversations in a dynamic multiracial America.