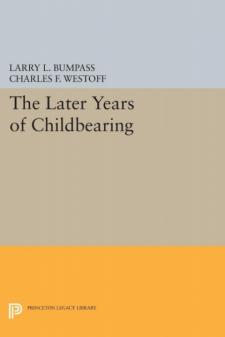 Why do American couples differ in the number of children they have? To answer this question the first major longitudinal study in American fertility was begun in 1957 with a series of interviews with parents of two children. Family Growth in Metropolitan America (1961) and The Third Child (1963) reported the results of the first two phases of this research project. In this book, in addition to evaluating the longitudinal design of the study, the authors report the results of the third and final interviews, a decade after the first, and attempt to answer such questions as: How well are couples able to predict their own fertility over the years? To what extent does the number of children desired affect the spacing of births? How is fertility affected by peer group relations, by the wife's participation in the labor force, by religion?Originally published in 1971.The Princeton Legacy Library uses the latest print-on-demand technology to again make available previously out-of-print books from the distinguished backlist of Princeton University Press. These editions preserve the original texts of these important books while presenting them in durable paperback and hardcover editions. The goal of the Princeton Legacy Library is to vastly increase access to the rich scholarly heritage found in the thousands of books published by Princeton University Press since its founding in 1905.