Mystery of the Invisible Hand 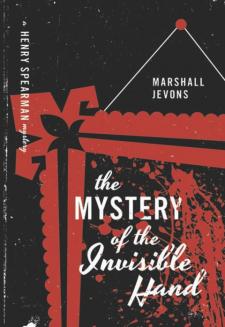 Fictional sleuth Henry Spearman returns to solve a murder mystery involving art and economicsHenry Spearman, the balding economics professor with a knack for solving crimes, returns in The Mystery of the Invisible Hand-a clever whodunit of campus intrigue, stolen art, and murder. Having just won the Nobel Prize, Spearman accepts an invitation to lecture at Monte Vista University. He arrives in the wake of a puzzling art heist with plans to teach a course on art and economics-only to be faced with the alleged suicide of womanizing artist-in-residence Tristan Wheeler. When it becomes clear that Wheeler had serious enemies and a murderer is in their midst, Henry Spearman is on the case.Was Wheeler killed by a jilted lover, a cuckolded husband, or a beleaguered assistant? Could there have been a connection between Wheeler's marketability and his death? From the Monte Vista campus in San Antonio to the halls of Sotheby's in New York, Spearman traces the connections between economics and the art world, finding his clues in monopolies and the Coase conjecture, auction theory, and the work of Adam Smith. What are the parallels between a firm's capital and an art museum's collection? What does the market say about art's authenticity versus its availability? And what is the mysterious &quote;death effect&quote; that lies at the heart of the case? Spearman must rely on his savviest economic insights to clear up this artful mystery and pin down a killer.