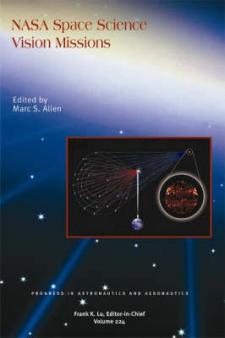 In order to extend analyses of the scientific objectives, system design, and operations of potential future space science missions, and to identify precursor technology requirements, The National Aeronautics and Space Administration (NASA) has funded studies for a variety of advanced missions - the Space Science Vision Missions. The investigator teams have completed their formal final reports for these studies.The teams were invited to develop shorter, summary versions of these final Vision Mission reports suitable for a broader audience. This book, published in partnership with NASA, is the culmination of that effort. Each of the eight reports sketches out a revolutionary mission concept, providing information on its scientific rationale, architecture and implementation approach, technology challenges, and deployment and operations. A final chapter describes an analysis of directions for future technology development inspired by this portfolio of mission concepts.It includes reports such as: Solar Polar Imager - Observing Solar Activity from a New Perspective (Using a solar sail, the Solar Polar Imager mission will observe the Sun from a polar orbit to observe magnetic fields and convective flows in the polar regions as well as coronal mass ejections and the Sun's outer atmosphere in order to better understand the solar dynamo and solar activity); Titan Explorer - Next Step in the Exploration of a Mysterious World (The Titan Explorer mission includes an orbiter with remote sensing instruments and an airship platform to investigate the atmosphere, clouds, haze, and surface of Saturn's moon Titan).
It also includes: Neptune Orbiter with Probes - Flagship Mission to the Neptune System (The Neptune Orbiter with Probes mission will use aerocapture to explore the ice giant Neptune and its rings and magnetosphere, analogs for the primordial solar nebula and accretion disks around other stars, and its satellite Triton, which resembles small objects at the outer boundary of our solar system today); Neptune Orbiter, Probe, and Triton Lander - The Neptune Orbiter, Probe, and Lander mission will use nuclear electric propulsion to investigate Neptune and orbit its satellite, Triton; and, Leaving the Heliosphere - A Nuclear-Powered Interstellar Probe (the Interstellar Probe will leave the heliosphere to explore interstellar space, learning about its composition and dynamics and its interaction with our solar system).It also includes: The Stellar Imager - A UV-Optical Interferometer in Space (observing distant stars and active galaxies with ultra-high resolution, the Stellar Imager mission will reveal their magnetic activity and internal structure, helping us understand solar activity and magnetohydrodynamics throughout the Universe); The Modern Universe Space Telescope - Observing distant galaxies almost as we observe our own galaxy today, the Modern Universe Space Telescope will illuminate how chemical elements are created and dispersed, how normal galaxies form and evolve, and how stars and planetary systems form; and, Generation X - A Large Area and High Resolution X-ray Observatory to Study the Early Universe (the Generation X mission will observe the creation and evolution of the first black holes formed when the Universe was only a few hundred million years old).