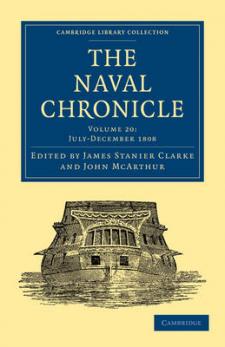 The Naval Chronicle, published in 40 volumes between 1799 and 1818, is a key source for British maritime and military history. This reissue is the first complete printed reproduction of what was the most influential maritime publication of its day. The subjects covered range from accounts of battles and lists of ships to notices of promotions and marriages, courts martial and deaths, and biographies, poetry and letters. Each volume also contains engravings and charts relating to naval engagements and important harbours around the world. Volume 20, published in 1808 at the start of the Peninsular War, contains numerous intelligence reports relating to Sir Arthur Wellesley's departure for Portugal and the aftermath of the Battle of Vimiero. The terms of the French surrender and departure from Portugal are also reproduced and discussed. Technical and professional articles include suggested improvements for lighthouses, and maps and descriptions of Penang Island, Malaysia and Plymouth.