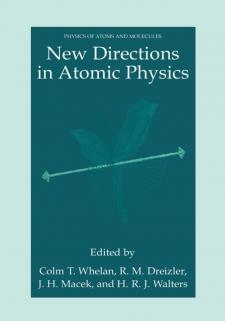 The last few years have seen some remarkable advances in the understanding of atomic phenomena. It is now possible to isolate atomic systems in traps, measure in coincidence the fragments of collision processes, routinely produce, and study multicharged ions. One can look at bulk matter in such a way that the fundamental atomic character is clearly evident and work has begun to tease out the properties of anti­ matter. The papers in this book reflect many aspects of modem Atomic Physics. They correspond to the invited talks at a conference dedicated to the study of "New Directions in Atomic Physics," which took place in Magdalene College, Cambridge in July of 1998. The meeting was designed as a way of taking stock of what has been achieved and, it was hoped, as a means of stimulating new research in new areas, along new lines. Consequently, an effort was made to touch on as many directions as we could in the four days of the meeting. We included some talks which overviewed whole subfields, as well as quite a large number of research contributions. There is a unity to Physics and we tried to avoid any artificial division between theory and experiment. We had roughly the same number of talks from those who are primarily concerned with making measurements, and from those who spend their lives trying to develop the theory to describe the experiments.