Not Exactly a Brahmin 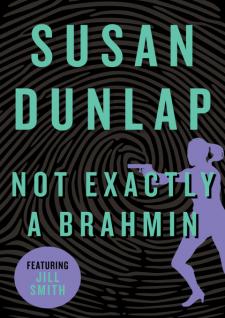 Newly promoted detective Jill Smith confronts a traffic circle homicide After six months of perfect weather, the people of Berkeley, California, have forgotten how to drive during a thunderstorm. Newly christened homicide detective Jill Smith is on her way home to a chocolate ice cream dinner when she gets caught in a traffic jam at the city’s only roundabout. At the front of the line, she sees the trouble: a flipped-over Cadillac and one dead driver.   The man behind the wheel was one of the city’s leading citizens, a philanthropist in a town that puts charity first. He was coming down Berkeley’s steepest hill when his brakes failed, flipping his car and ending his charity work forever. Two things trouble Jill. First, the car’s brakes had been inspected that afternoon. Second, the driver was nearly blind, and unfit to ever take the wheel. Finding the killer will lead her from Berkeley’s upper echelon all the way into the depths of the community’s underbelly. This ebook features an illustrated biography of Susan Dunlap including rare images from the author’s personal collection.