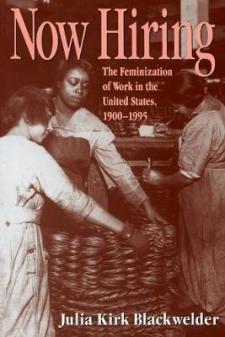 As the twentieth century draws to an end, the changing role of women appears as one of the dominant features of the era. In Now Hiring, historian Julia Blackwelder traces the century-long evolution of the American occupational structure and the ensuing rise in demand for female workers through the closing episodes of the Industrial Revolution and the advent of postindustrialism. Decade by decade, she adroitly traces the main lines of the development of the female work force and its interactions with education, family life, and social convention while developing a nuanced analysis of the differential patterns for various ethnic, racial, age, and socioeconomic groups. Through vignettes of individual women, given context by statistical data that place them within larger patterns of work and family life, Blackwelder presents her arguments "with flesh on them." She offers a pioneering consideration of non-paid employment as part of the picture of women and work and incorporates an intriguing case study of the evolution of the Girl Scout organization. Her consideration of the interaction of race, class, gender, and economic forces in the evolving roles of working women--particularly since she weaves these issues into every discussion, rather than isolating them as afterthoughts--also makes an intellectual contribution to the field of women's studies. In her conclusion, Blackwelder summarizes the effects of a century of change in women's employment and delineates the social and economic challenges that will confront women and families of the twenty-first century.

Blackwelder portrays the larger economy as the premier driving force for patterns of female work. She demonstrates that the reconfiguration of the women's labor market followed the shift of the leading sector, from agriculture in the nineteenth century to manufacturing and eventually to service industries. In addition, she shows how changes in the labor market redirected female education and transformed family structures in the United States and how these changes in turn contributed to the further restructuring of job opportunities and salary structures.

Blackwelder analyzes how gender conventions have affected the employment of women: what industries would hire them, what positions they were considered for, what pay was considered appropriate. Considering how the shift in the national economy and the growing female permeation of the labor force changed the dynamics and economics of family life, she shows that although wage-earning wives gained more authority within marriage, they also assumed heavier responsibilities for the financial support of their families. As rising rates of separation and divorce further burdened mothers (who generally had child custody), women's economic advances paradoxically worsened their overall financial well-being.

This survey of U.S. women and work introduces students and general readers alike to these important topics, and the distinctiveness of Blackwelder's approach, blending quantitative data and oral history materials, as well as the cogency of her underlying arguments, give the book importance to scholars of labor and economic history and women's studies.