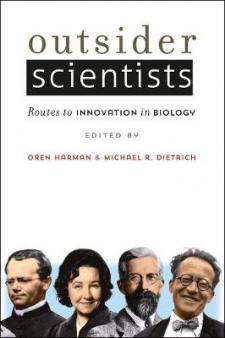 Outsider Scientists describes the transformative role played by "outsiders" in the growth of the modern life sciences. Biology, which occupies a special place between the exact and human sciences, has historically attracted many thinkers whose primary training was in other fields: mathematics, physics, chemistry, linguistics, philosophy, history, anthropology, engineering, and even literature. These outsiders brought with them ideas and tools that were foreign to biology, but which, when applied to biological problems, helped to bring about dramatic, and often surprising, breakthroughs. This volume brings together eighteen thought-provoking biographical essays of some of the most remarkable outsiders of the modern era, each written by an authority in the respective field. From Noam Chomsky using linguistics to answer questions about brain architecture, to Erwin Schrodinger contemplating DNA as a physicist would, to Drew Endy tinkering with Biobricks to create new forms of synthetic life, the outsiders featured here make clear just how much there is to gain from disrespecting conventional boundaries. Innovation, it turns out, often relies on importing new ideas from other fields.
Without its outsiders, modern biology would hardly be recognizable.