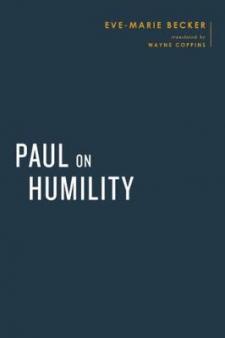 Humility in the modern world is neither well understood nor well received. Many see it as a sign of weakness; others decry it as a Western construct whose imposition onto marginalized persons only perpetuates oppression. This skepticism has a long pedigree: Aristotle, for instance, pointed to humility as a shameless front. What then are we to make of the New Testament's valorization of this trait?

Translated from German into English for the first time, Paul on Humility seeks to reclaim the original sense of humility as an ethical frame of mind that shapes community, securing its centrality in the Christian faith. This exploration of humility begins with a consideration of how the concept plays into current cultural crises before considering its linguistic and philosophical history in Western culture. In turning to the roots of Christian humility, Eve-Marie Becker focuses on Philippians 2, a passage in which Paul appeals to the lowliness of Christ to encourage his fellow Christians to persevere. Becker shows that humility both formed the basis of the ethic Paul instilled in churches and acted as a mimetic device centered on Jesus' example that was molded into the earliest Christian identity and community.

Becker resists the urge to cheapen humility with mere moralism. In the vision of Paul, the humble individual is one immersed in a complex, transformative way of being. The path of humility does not constrain the self; rather, it guides the self to true freedom in fellowship with others. Humility is thus a potent concept that speaks to our contemporary anxieties and discomforts.

Not for sale in Europe.