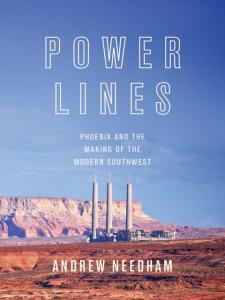 How high energy consumption transformed postwar Phoenix and deepened inequalities in the American SouthwestIn 1940, Phoenix was a small, agricultural city of sixty-five thousand, and the Navajo Reservation was an open landscape of scattered sheepherders. Forty years later, Phoenix had blossomed into a metropolis of 1.5 million people and the territory of the Navajo Nation was home to two of the largest strip mines in the world. Five coal-burning power plants surrounded the reservation, generating electricity for export to Phoenix, Los Angeles, and other cities. Exploring the postwar developments of these two very different landscapes, Power Lines tells the story of the far-reaching environmental and social inequalities of metropolitan growth, and the roots of the contemporary coal-fueled climate change crisis.Andrew Needham explains how inexpensive electricity became a requirement for modern life in Phoenix-driving assembly lines and cooling the oppressive heat. Navajo officials initially hoped energy development would improve their lands too, but as ash piles marked their landscape, air pollution filled the skies, and almost half of Navajo households remained without electricity, many Navajos came to view power lines as a sign of their subordination in the Southwest. Drawing together urban, environmental, and American Indian history, Needham demonstrates how power lines created unequal connections between distant landscapes and how environmental changes associated with suburbanization reached far beyond the metropolitan frontier. Needham also offers a new account of postwar inequality, arguing that residents of the metropolitan periphery suffered similar patterns of marginalization as those faced in America's inner cities.Telling how coal from Indian lands became the fuel of modernity in the Southwest, Power Lines explores the dramatic effects that this energy system has had on the people and environment of the region.