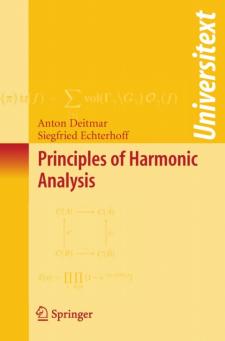 The tread of this book is formed by two fundamental principles of Harmonic Analysis: the Plancherel Formula and the Poisson S- mation Formula. We ?rst prove both for locally compact abelian groups. For non-abelian groups we discuss the Plancherel Theorem in the general situation for Type I groups. The generalization of the Poisson Summation Formula to non-abelian groups is the S- berg Trace Formula, which we prove for arbitrary groups admitting uniform lattices. As examples for the application of the Trace F- mula we treat the Heisenberg group and the group SL (R). In the 2 2 former case the trace formula yields a decomposition of the L -space of the Heisenberg group modulo a lattice. In the case SL (R), the 2 trace formula is used to derive results like the Weil asymptotic law for hyperbolic surfaces and to provide the analytic continuation of the Selberg zeta function. We ?nally include a chapter on the app- cations of abstract Harmonic Analysis on the theory of wavelets. The present book is a text book for a graduate course on abstract harmonic analysis and its applications. The book can be used as a follow up of the First Course in Harmonic Analysis, [9], or indep- dently, if the students have required a modest knowledge of Fourier Analysis already. In this book, among other things, proofs are given of Pontryagin Duality and the Plancherel Theorem for LCA-groups, which were mentioned but not proved in [9].