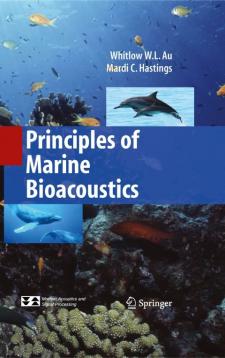 Humans have always been fascinated by marine life, from extremely small diatoms to the largest mammal that inhabits our planet, the blue whale. However, studying marine life in the ocean is an extremely difficult propo- tion because an ocean environment is not only vast but also opaque to most instruments and can be a hostile environment in which to perform expe- ments and research. The use of acoustics is one way to effectively study animal life in the ocean. Acoustic energy propagates in water more efficiently than almost any form of energy and can be utilized by animals for a variety of purposes and also by scientists interested in studying their behavior and natural history. However, underwater acoustics have traditionally been in the domain of physicists, engineers and mathematicians. Studying the natural history of animals is in the domain of biologists and physiologists. Und- standing behavior of animals has traditionally involved psychologists and zoologists. In short, marine bioacoustics is and will continue to be a diverse discipline involving investigators from a variety of backgrounds, with very different knowledge and skill sets. The inherent inter-disciplinary nature of marine bioacoustics presents a large challenge in writing a single text that would be meaningful to various investigators and students interested in this field. Yet we have embarked on this challenge to produce a volume that would be helpful to not only beginning investigators but to seasoned researchers.