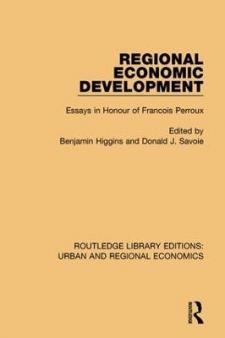 Originally published in 1988. Leading international researchers in regional economic development have contributed an integrated set of chapters reviewing the whole field and taking stock of current thinking. The book is in honour of Francois Perroux, the father of regional development theory, whose contributions to two important concepts in economics - time and space - have been substantial. The book comprises five parts. Part one covers Perroux's work in general and on growth poles in particular. Part two deals with 'the politics of place', population and regional development, techniques for regional policy analysis and a neoclassical approach to regional economics. In part three the Canadian scene is reviewed at national and regional levels. In part four chapters on urban development, small and medium-size cities, and capital grants deal with the experiences of other countries. Part five concludes the book with a chapter on growth poles, optimal size of cities, and regional disparities and government intervention.