Renaissance Humanism, from the Middle Ages to Modern Times 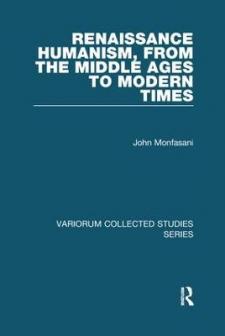 Starting with an essay on the Renaissance as the concluding phase of the Middle Ages and ending with appreciations of Paul Oskar Kristeller, the great twentieth-century scholar of the Renaissance, this new volume by John Monfasani brings together seventeen articles that focus both on individuals, such as Erasmus of Rotterdam, Angelo Poliziano, Marsilio Ficino, and NiccolA(2) Perotti, and on large-scale movements, such as the spread of Italian humanism, Ciceronianism, Biblical criticism, and the Plato-Aristotle Controversy. In addition to entering into the persistent debate on the nature of the Renaissance, the articles in the volume also engage what of late have become controversial topics, namely, the shape and significance of Renaissance humanism and the character of the Platonic Academy in Florence.