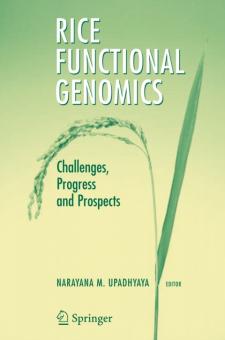 Rice has been chosen as the model cereal for functional genomics by the international scientific community not only because rice is a major food crop of the world but also because of its small genome (~430 Mb which is the smallest among cereal genomes); the ease with which it can be transformed; its well understood genetics with detailed genome physical maps and dense molecular markers; and the existence of great similarities in gene sequence, gene structure, gene order and gene function among all the cereals and grasses. Genes identified in rice as being important agronomically are also important in other cereals, and any understanding of rice genes is directly applicable to other cereals. Rice Functional Genomics - Challenges, Progress and Prospects covers the whole spectrum of rice functional genomics. In addition to overviews of current status of genome sequencing and annotation, various tools and resources being developed worldwide such as expressed sequence tags (ESTs), full-length cDNAs, gene expression profiles (transcriptome, proteome and metabolome), chemical- and radiation-induced mutants, TILLING resources, insertional knockout mutants (T-DNA, transposon and retrotransposon) and activation tags have been described in various chapters. Exploitation of naturally occurring alleles, Oryza alignment maps (OMAP), gene targeting by homologous recombination and gene silencing by RNAi as well as the application of functional genomics tools for crop improvement and the power of comparative genomics are covered in separate chapters. Various bioinformatics tools and resources pertinent to rice functional genomics are also described and discussed. It is hoped that scientists involved in all aspects of rice research will find this book useful as it spans the divide between molecular biology and plant improvement.