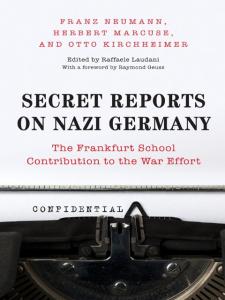 A groundbreaking book that gathers key wartime intelligence reports During the Second World War, three prominent members of the Frankfurt School—Franz Neumann, Herbert Marcuse, and Otto Kirchheimer—worked as intelligence analysts for the Office of Strategic Services, the wartime forerunner of the CIA. This book brings together their most important intelligence reports on Nazi Germany, most of them published here for the first time. These reports provide a fresh perspective on Hitler's regime and the Second World War, and a fascinating window on Frankfurt School critical theory. They develop a detailed analysis of Nazism as a social and economic system and the role of anti-Semitism in Nazism, as well as a coherent plan for the reconstruction of postwar Germany as a democratic political system with a socialist economy. These reports played a significant role in the development of postwar Allied policy, including denazification and the preparation of the Nuremberg Trials. They also reveal how wartime intelligence analysis shaped the intellectual agendas of these three important German-Jewish scholars who fled Nazi persecution prior to the war. Secret Reports on Nazi Germany features a foreword by Raymond Geuss as well as a comprehensive general introduction by Raffaele Laudani that puts these writings in historical and intellectual context.