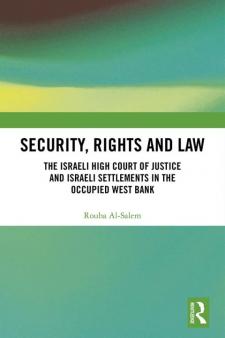 Winner of the 2019 Francis Lieber Prize Recognizing an Exceptional Published Book in the Field of the Law of Armed ConflictThis book examines how the Israeli High Court of Justice (HCJ) has interpreted and applied international law principles in adjudicating petitions filed by Palestinians. The research focuses on HCJ judgments that have been rendered since the outbreak of the Second Intifada (2000) in relation to petitions challenging the legality of measures implemented by various Israeli governments and military authorities for the professed need of enhancing the security of Israeli settlements and settlers in the occupied West Bank. It discusses to what extent the HCJ provides a venue for an effective domestic remedy for alleged violations of the Palestinians' internationally protected rights. It further analyses the judgments of the Court seeking to demonstrate why it appears to show a preference for invoking principles of Israeli administrative and constitutional law, thereby promoting the domestic rather than international Rule of Law. Although the jurisprudence of the HCJ has often been hailed as that of an 'activist' court, the analysis of petitions adjudicated by the Court between 2000 and 2014 illustrates why its approach is ill-suited to a situation of prolonged military occupation. Finally, the book evaluates what impact the Court's adjudication, reasoning and interpretation has on the normative coherence of the international law of belligerent occupation.