Seventy Years on the Frontier - The Original Classic Edition 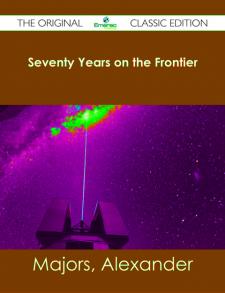 Finally available, a high quality book of the original classic edition of Seventy Years on the Frontier. It was previously published by other bona fide publishers, and is now, after many years, back in print.

This is a new and freshly published edition of this culturally important work by Alexander Majors, which is now, at last, again available to you.

Get the PDF and EPUB NOW as well. Included in your purchase you have Seventy Years on the Frontier in EPUB AND PDF format to read on any tablet, ereader, desktop, laptop or smartphone simultaneous - Get it NOW.

Enjoy this classic work today. These selected paragraphs distill the contents and give you a quick look inside Seventy Years on the Frontier:

There was about one-fourth of the entire territory of Missouri that was covered with timber, and three-fourths in prairie land, with an annual growth of sage-grass, as it was called, about one and one-half feet high, and as thick as it could well grow; in fact the prairie lands in the commencement of its settlement were one vast meadow, where the farmer could cut good hay suitable for the wintering of his stock almost without regard to the selection of the spot; in other words, it was meadow everywhere outside of the timber lands.

...In those times all were on an equality, for each man and his family had to produce what was required to live upon, and when one man was a little better dressed than another there could be no complaint from his neighbor, for each one had the same means in his hands to bring about like results, and he could not say his neighbor was better dressed than he was because he had cheated some other neighbor out of something, and bought the dress; for at that time the goods all had to come to them in the same way—by their own industry.