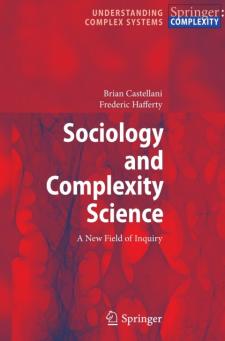 By now, most academics have heard something about the new science of complexity. In a manner reminiscent of Einstein and the last hundred years of physics, complexity science has captured the public imagination. ® One can go to Amazon. com and purchase books on complexification (Casti 1994), emergence (Holland 1998), small worlds (Barabási 2003), the web of life (Capra 1996), fuzzy thinking (Kosko 1993), global c- plexity (Urry 2003) and the business of long-tails (Anderson 2006). Even television has incorporated the topics of complexity science. Crime shows ® ® such as 24 or CSI typically feature investigators using the latest advances in computational modeling to “simulate scenarios” or “data mine” all p- sible suspects—all of which is done before the crime takes place. The ® World Wide Web is another example. A simple search on Google. Com using the phrase “complexity science” gets close to a million hits! C- plexity science is ubiquitous. What most scholars do not realize, however, is the remarkable role sociologists are playing in this new science. C- sider the following examples. 0. 1 Sociologists in Complexity Science The first example comes from the new science of networks (Barabási 2003). By now, most readers are familiar with the phenomena known as six-degrees of separation—the idea that, because most large networks are comprised of a significant number of non-random weak-ties, the nodes (e. g. , people, companies, etc.