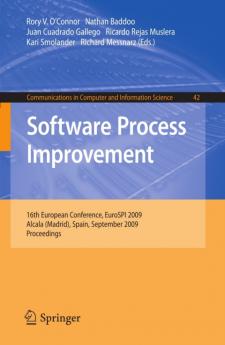 This textbook is intended for SPI (software process improvement) managers and - searchers, quality managers, and experienced project and research managers. The papers constitute the research proceedings of the 16th EuroSPI (European Software Process Improvement, www.eurospi.net) conference held in Alcala (Madrid region), September 2–4, 2009, Spain. Conferences have been held since 1994 in Dublin, 1995 in Vienna (Austria), 1997 in Budapest (Hungary), 1998 in Gothenburg (Sweden), 1999 in Pori (Finland), 2000 in Copenhagen (Denmark), 2001 in Limerick (Ireland), 2002 in Nuremberg (G- many), 2003 in Graz (Austria), 2004 in Trondheim (Norway), 2005 in Budapest (Hungary), 2006 in Joensuu (Finland), 2007 in Potsdam (Germany), 2008 in Dublin (Ireland), and 2009 in Alcala (Spain). EuroSPI established an experience library (library.eurospi.net) which will be conti- ously extended over the next few years and will be made available to all attendees. EuroSPI also created an umbrella initiative for establishing a European Qualification Network in which different SPINs and national initiatives join mutually beneficial collaborations (ECQA – European Certification and Qualification Association, www.ecqa.org). With a general assembly during October 15–16, 2007 through Euro-SPI partners and networks, in collaboration with the European Union (supported by the EU L- nardo da Vinci Programme) a European certification association has been created (www.eu-certificates.org, www.ecqa.org) for the IT and services sector to offer SPI knowledge and certificates to industry, establishing close knowledge transfer links between research and industry.