The Source of the River 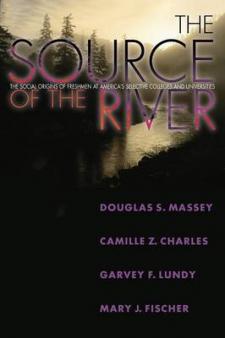 African Americans and Latinos earn lower grades and drop out of college more often than whites or Asians. Yet thirty years after deliberate minority recruitment efforts began, we still don't know why. In The Shape of the River, William Bowen and Derek Bok documented the benefits of affirmative action for minority students, their communities, and the nation at large. But they also found that too many failed to achieve academic success. In The Source of the River, Douglas Massey and his colleagues investigate the roots of minority underperformance in selective colleges and universities. They explain how such factors as neighborhood, family, peer group, and early schooling influence the academic performance of students from differing racial and ethnic origins and differing social classes. Drawing on a major new source of data--the National Longitudinal Survey of Freshmen--the authors undertake a comprehensive analysis of the diverse pathways by which whites, African Americans, Latinos, and Asians enter American higher education.
Theirs is the first study to document the different characteristics that students bring to campus and to trace out the influence of these differences on later academic performance. They show that black and Latino students do not enter college disadvantaged by a lack of self-esteem. In fact, overconfidence is more common than low self-confidence among some minority students. Despite this, minority students are adversely affected by racist stereotypes of intellectual inferiority. Although academic preparation is the strongest predictor of college performance, shortfalls in academic preparation are themselves largely a matter of socioeconomic disadvantage and racial segregation. Presenting important new findings, The Source of the River documents the ongoing power of race to shape the life chances of America's young people, even among the most talented and able.