Soviet Academy of Sciences and the Communist Party, 1927-1932 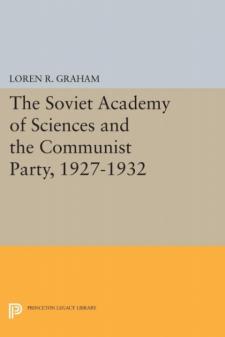 No other research organization dominates the field of science in its country to the degree that the Soviet Academy of Sciences does. The coming to power of the Bolsheviks in 1917 presented Russian science with a new governmental attitude toward the place of science in national life. The Soviet Union's first five-year plan, the period of this study, was the crucial period for the Academy. During this time the Academy was transformed. Between 1927 and 1932 important decisions were reached by Soviet leaders concerning the organization, control, and planning of science; the role of science in the national economy, the position of the individual scientist, and the nature of scientific research itself.Originally published in 1967.The Princeton Legacy Library uses the latest print-on-demand technology to again make available previously out-of-print books from the distinguished backlist of Princeton University Press. These editions preserve the original texts of these important books while presenting them in durable paperback and hardcover editions. The goal of the Princeton Legacy Library is to vastly increase access to the rich scholarly heritage found in the thousands of books published by Princeton University Press since its founding in 1905.