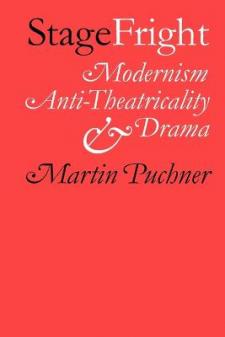 Grounded equally in discussions of theater history, literary genre, and theory, Martin Puchner's Stage Fright: Modernism, Anti-Theatricality, and Drama explores the conflict between avant-garde theater and modernism. While the avant-garde celebrated all things theatrical, a dominant strain of modernism tended to define itself against the theater, valuing lyric poetry and the novel instead. Defenders of the theater dismiss modernism's aversion to the stage and its mimicking actors as one more form of the old "anti-theatrical" prejudice. But Puchner shows that modernism's ambivalence about the theater was shared even by playwrights and directors and thus was a productive force responsible for some of the greatest achievements in dramatic literature and theater. A reaction to the aggressive theatricality of Wagner and his followers, the modernist backlash against the theater led to the peculiar genre of the closet drama-a theatrical piece intended to be read rather than staged-whose long-overlooked significance Puchner traces from the theatrical texts of Mallarme and Stein to the dramatic "Circe" chapter of Joyce's Ulysses.
At times, then, the anti-theatrical impulse leads to a withdrawal from the theater. At other times, however, it returns to the stage, when Yeats blends lyric poetry with Japanese Noh dancers, when Brecht controls the stage with novelistic techniques, and when Beckett buries his actors in barrels and behind obsessive stage directions. The modernist theater thus owes much to the closet drama whose literary strategies it blends with a new mise en scene. While offering an alternative history of modernist theater and literature, Puchner also provides a new account of the contradictory forces within modernism.