There Is No God

By David A. Williamson & George Yancey 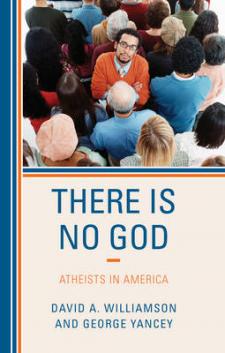 There Is No God: Atheists in America answers several questions pertaining to how the atheist population has grown from relatively small numbers to have a disproportionately large impact on important issues of our day, such as the separation of church and state, abortion, gay marriage, and public school curricula. Williamson and Yancey answer the common questions surrounding atheism. Just how common is the dismissal and derision of religion expressed by atheists? How are we to understand the world view of atheists and their motivations in political action and public discourse? Finally, is there any hope for rapprochement in the relationship of atheism and theism?

In There Is No God, the authors begin with a brief history of atheism to set the stage for a better understanding of contemporary American atheism. They then explore how the relationship between religious and atheistic ideologies has evolved as each attempted to discredit the other in different ways at different times and under very different social and political circumstances. Although atheists are a relatively small minority, atheists appear to be growing in number and in their willingness to be identified as atheists and to voice their non-belief. As those voices of atheism increase it is essential that we understand how and why those who are defined by such a simple term as "non-believers in the existence of God" should have such social and political influence. The authors successfully answer the broader question of the apparent polarization of the religious and non-religious dimensions of American society.