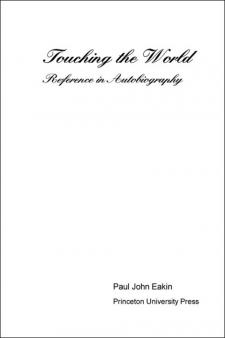 Paul John Eakin's earlier work Fictions in Autobiography is a key text in autobiography studies. In it he proposed that the self that finds expression in autobiography is in fundamental ways a kind of fictive construct, a fiction articulated in a fiction. In this new book Eakin turns his attention to what he sees as the defining assumption of autobiography: that the story of the self does refer to a world of biographical and historical fact. Here he shows that people write autobiography not in some private realm of the autonomous self but rather in strenuous engagement with the pressures that life in culture entails. In so demonstrating, he offers fresh readings of autobiographies by Roland Barthes, Nathalie Sarraute, William Maxwell, Henry James, Ronald Fraser, Richard Rodriguez, Henry Adams, Patricia Hampl, John Updike, James McConkey, and Lillian Hellman. In the introduction Eakin makes a case for reopening the file on reference in autobiography, and in the first chapter he establishes the complexity of the referential aesthetic of the genre, the intricate interplay of fact and fiction in such texts. In subsequent chapters he explores some of the major contexts of reference in autobiography: the biographical, the social and cultural, the historical, and finally, underlying all the rest, the somatic and temporal dimensions of the lived experience of identity. In his discussion of contemporary theories of the self, Eakin draws especially on cultural anthropology and developmental psychology.