Who Was Doris Hedges? 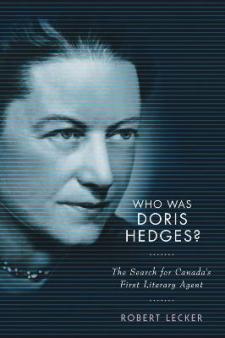 Despite her trailblazing efforts to represent the work of Canadian writers to publishers in North America and abroad, Doris Hedges (1896-1972), the Montreal author who started Canada's first literary agency in 1946, is routinely excluded from Canadian literary histories. In Who Was Doris Hedges? Robert Lecker provides a detailed account of her remarkable career. Hedges published several novels, short stories, and books of poetry, moved in Montreal literary circles, did a stint as a radio broadcaster, and provided reports to the Wartime Information Board during the Second World War, possibly as an American spy. She lived a privileged life in the Golden Square Mile district of downtown Montreal with her husband, Geoffrey Hedges, a member of the Benson and Hedges tobacco empire. The more one uncovers about Hedges's life, the more one discovers a courageous figure who was exploring many of the conflicted issues of her day: the rise of juvenile delinquency, the suppression of female sexuality, the place of women in business and finance, and the difficulties confronting the publishing industry in the years leading up to and following the war. Mixing lively biographical commentary with literary analysis, Who Was Doris Hedges? is a vivid account of a writer's life and concerns during a period when Canada's literature was coming of age.