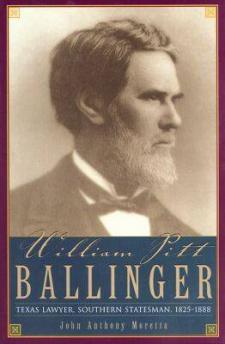 Few people have played a more important role in the history of Texas than William Pitt Ballinger. Though not as well known as legendary figures Stephen F. Austin or Sam Houston, Ballinger is one of those individuals whose behind-the-scenes life had a major impact on the events of his time. This thoroughly researched and engagingly written biography brings Ballinger to life as one of the most compleat men of his time: lawyer, soldier, public servant, civic leader, author, editorialist, naturalist, educational reformer, and bibliophile. But Ballinger's life was not just about the law: it was about living life to the fullest. He was an intense, driven man, devoted to his family, his law practice, his nation, and his beloved state. In Ballinger's fascinating life and career we see reflected some of the most important issues of his era, including secession, slavery, corporations, and the law. The social, political, and cultural climate of Texas, the South, and the nation are revealed through the life, eyes, and mind of this remarkable, articulate man whose life spanned much of the nineteenth century.