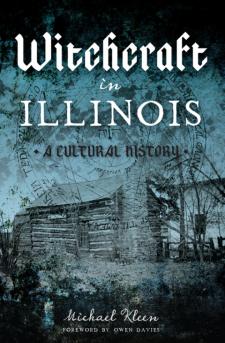 The hidden history of witchcraft in the Land of Lincoln is revealed in this unique study by the author ofHaunting Illinois. Although the Salem Witch Trials have drawn focus to New England as the center of witchcraft in American history, the practice was widespread across the Midwest. In Illinois, witchcraftand witch persecutionhave been part of local culture since French explorers arrived in the 17thcentury. InWitchcraft in Illinois, historian Michael Kleen presents the full story of the Prairie States dalliance with the dark arts. On the Illinois frontier, pioneers pressed silver dimes into musket balls to ward off witches, while farmers dutifully erected fence posts according to phases of the moon. In 1904, the quiet town of Quincy was shocked to learn of Bessie Bements suicide, after the young woman sought help from a witch doctor to break a hex. In turn-of-the-century Chicago, Lauron William de Laurences occult publishing house churned out manuals for performing bizarre rituals intended to attract love and exact revenge.